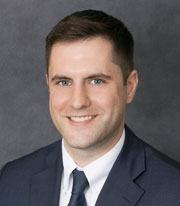 Nicholas Orecki (“Nick”) is an associate at Rowlands, LeBrou & Griesmer, PLLC, where he will be concentrating on Trusts and Estates law and estate litigation.

Prior to joining Rowlands, LeBrou & Griesmer, PLLC, Nick was employed as an associate attorney in the Trusts and Estates department of a Capital District law firm, where his practice concentrated on estate litigation and administration, as well as other civil matters. Nick has experience in Surrogate’s and Supreme Courts in all stages of litigation in a wide variety of matters including will contests, contested accountings, turnover proceedings, and matters brought pursuant to Article 81 of the Mental Hygiene Law.

A cum laude graduate of Albany Law School, Nick was selected as a member of the distinguished Justinian Society upon graduation. While a student Nick interned in two local District Attorney’s offices, where he regularly appeared in court pursuant to a Student Practice Order. He also served as judicial intern to the Honorable Lawrence Kahn in the U.S. District Court of the Northern District of New York. In addition to his studies and internship experiences, Nick served as a teaching assistant to first-year students for Constitutional Law and was actively involved in the law school’s Pro Bono Society as a Project Director. He earned his bachelor’s degree in Political Science from The College at Brockport, State University of New York.